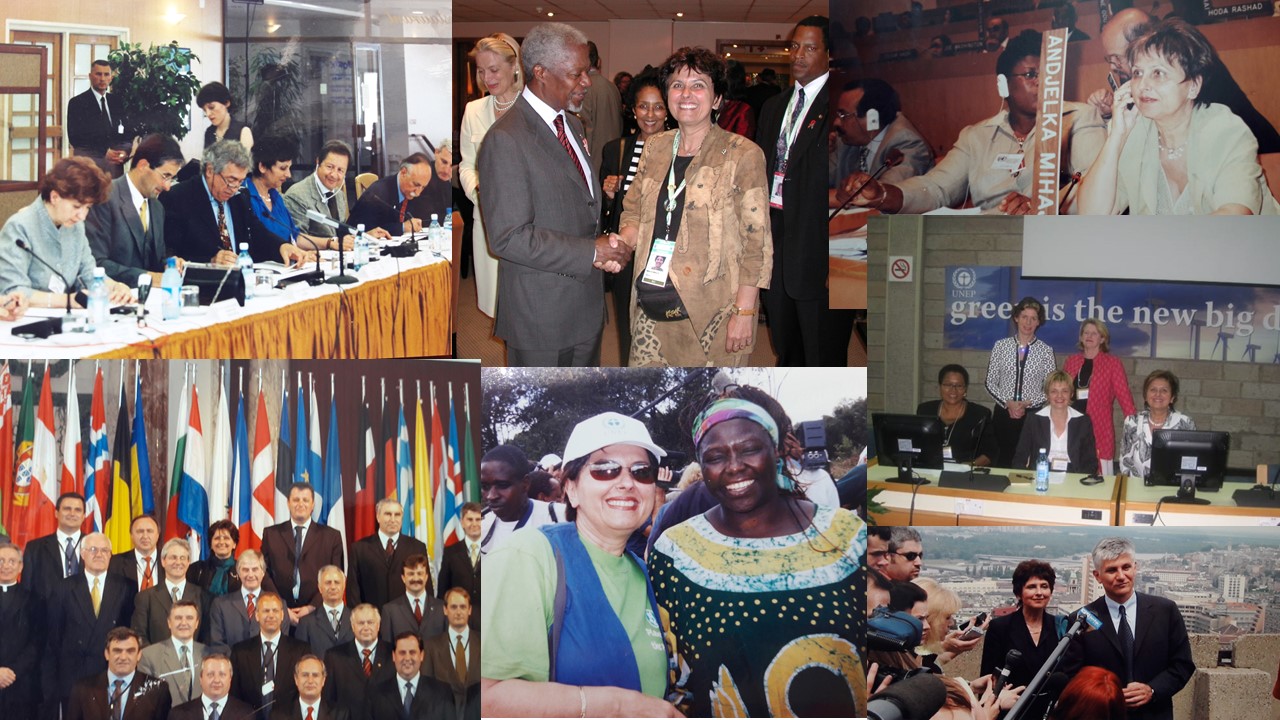 Some snapshots from process initiated:

– In 2002, UNEP Executive Director endorsed Ms Mihajlov appointment as Minister for the Protection of Natural Resources and Environment “with excellent track record” in the “ongoing cooperation between the Republic of Serbia and UNEP in various areas, including the environmental clean-up of hotspots and the joint multifaceted capacity building program”. Also, UNEP Director and Regional Representative for Europe underlined her “crucial personal involvement” in ongoing cooperation in hazardous waste management, green investments, sustainable consumption and cleaner production, as well support on mountain sustainable development. In December, former Hessian environmental laboratory ship MS Argus was delivered to Serbian Ministry.

– In 2003, the first after conflict Ministerial meeting at regional level was held Zadar, Croatia resulted in the joint application of countries from Region to European Environmental Agency ; In Skoplje, Macedonia, Ms Mihajlov, proposed Declaration for environmental cohesion among the countries in Region -resulted with Joint Statement by the Ministers of Environment and Heads Delegation of Albania, Bosnia and Herzegovina, Croatia, Macedonia, Serbia and Montenegro where the need for environmental cohesion in the Western Balkan/Stabilization and Association Process countries was accepted; Regional environmental cohesion initiative was also supported in written by Minister of Environment and Water of Bulgaria; Federal Minister for Agriculture, Forestry, Environment and Water Management of Austria; Ms Mihajlov presented Initiative at CEP UNECE Geneva Meeting, and in Brussels at Regional Environmental Reconstruction Programme Task Force Meeting.
– In December 2003. draft text of Declaration on Environmental Cohesion in the Region as supporting tool to Western Balkan countries accession to EU was prepared; under Ms Mihajlov initiative and leadership Belgrade is elected to host Ministerial Pan-European Conference “Environment for Europe” in 2007.
– Process contributed and goes hand in hand with ENVSEC establishment by UNEP, UNDP, UNECE, OSCE and REC (the mission of ENVSEC was to contribute to the reduction of environment and security risks through strengthened cooperation among and within countries in four regions, among them South-Eastern Europe)
– Later in 2003, Ms Mihajlov presented achieved steps within the Initiative at informal EU Environment Ministers Meeting/informal Council Meeting in Athens, Greece; she was also supported establishment of UNEP Network of Women Ministers and Leaders for the Environment (she is member since then, now as the Leader).

– In 2004, Ms Mihajlov was nominated and short listed for the global Champion of the Earth Award, for clearly established as the leading actor for the environment at the regional level, progressive force in troubled region, her level of dedication, work that she initiated at regional level, as a catalyst in mending relations between the countries in South Eastern Europe, which are only slowly emerging from the bitterness of recent conflicts. She was nominated jointly by HE Ambassador Extraordinary and Plenipotentiary of Sweden in Serbia and Montenegro, HE Ambassador Extraordinary and Plenipotentiary of Finland in Serbia and Montenegro, Hessian Minister for the Environment-Germany, Economist from the World Bank, Advisor from JICA Austrian Office, State Secretary in Slovenian Ministry of the Environment, Spatial Planning and Energy, as well as some colleagues, and further supported and recommended by UNEP Regional Office for Europe. In nomination letters they underlined her:
o Leadership to address environmental problems that concern the region, notably climate change, pollution of international waterways, persistent organic pollutants, biodiversity protection;
o An exemplary cooperation with UNEP in the sensitive period after NATO bombing campaign;
o Effectively contribution to break the country’s international isolation during 1990’s;
o tireless work to enhance the global perspective in the national and regional sustainable development strategies; also, she was initiated GEF activities;
o recognition as one of the most progressive and competent ministers;
o dedication, hard work and dynamism to put environment on the country’s agenda;
o commitment to integrate environment into sectoral policies;
o vision to incorporate environmental concerns into the privatization process;
o enthusiasm  taken the lead in the elaboration of a sustainable development strategy in Serbia;
o  her exceptional professional qualities with a great sense for team building; successfully grooming a younger generation of Serbian environmentalists, many of them are women;
o academic background, greatly helped to open the discussion and to get public and private organization involved in the protection and sustainable management of environmental and natural resources.

– In 2007, SEE Regional Declaration on Environmental Cohesion as the tool to EU integration and Sustainable Development, is approved as the platform by regional NGOs (Serbia and UNMIK/Kosovo, Macedonia, Bosnia and Herzegovina, Montenegro, Albania), at Conference EnE07 in Belgrade; The declaration affirms the shared goal of peace, stability, security, prosperity for citizens in the region and environmental cohesion, as an instrument to achieve sustainable development and accelerated association with the EU; The initiative was presented in 2007 at the event accompanying the Sixth UNECE Ministerial Conference Environment for Europe” and specific activities have been undertaken.

– In years 2008+ regional environmental cohesion approach was having potentials to be used as one of the instruments for regional security, peace and (sustainable) development (as Ms Mihajlov presented at Pan-European Conference on EU Politics, in Riga, Latvia.

– For about one decade , Initiative was not with high attention (although EU established regional treaties, ENVSEC activities are in place, some regional CSOs networks like Environment Forum and ENV.net are promoting regional environmental cohesions through actions ).

– In recent years (around 2020+), when look at the actions in place, seems that strong rethinking is going on and initiated regional environmental cohesion started new life, justifying the value and need of regional environmental cohesion, as initiated by Ms Mihajlov in 2003 – and she is continuing to be there as Environmental Ambassador for Sustainable Development ( like a regional approach to fighting pollution is crystallizing ahead of the and at the fourth UN Environment Assembly -UNEA4, Nairobi 2019)

2021: Our Future through the Sustainable Development Goals 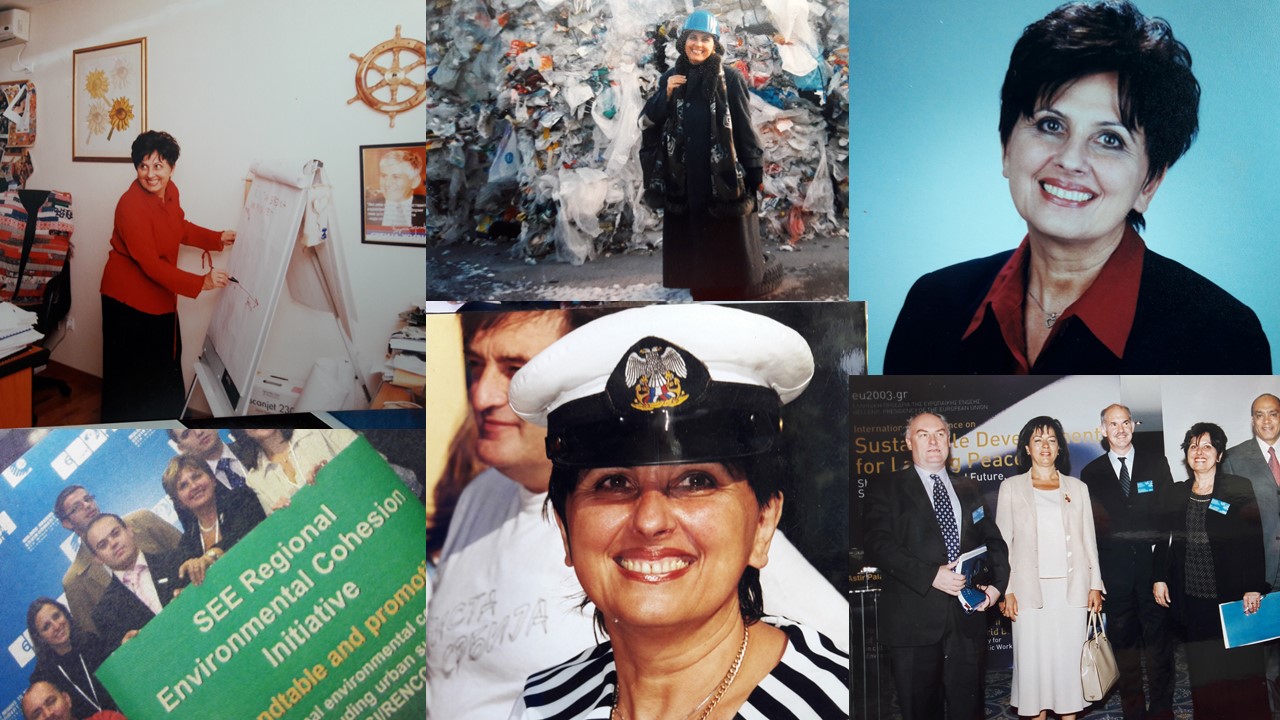