ENV.net 3 : ENV-net factoring the environmental portfolio for Western Balkans and Turkey in the EU Policy Agenda

We are happy to announce the beginning of the third phase of ENV-net. 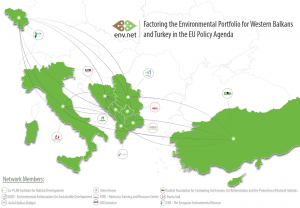 After 5 years of activity, the ENV-net today, counts for a member in each Instrument for Pre-accession Assistance country, this includes two newly joined organisations from Montenegro, and Bosnia and Herzegovina which co-operate with the network since 2016. The network is supported by partners in Italy – punto.sud and Belgium – European Environmental Bureau – EEB, both bringing to the network experience and best practices from two EU member states, as well as the possibility to align with similar ongoing initiatives within the EU.

Why ENV-net factoring the environmental portfolio for Western Balkans and Turkey in the EU Policy Agenda?
Recent natural occurrences such as repeated massive floods, and the EU accession obligations the Western Balkans and Turkey region must fulfil, highlight the immediacy of action required in the field of climate change and environmental protection.
For it to be effective, such action requires a solid pan-regional commitment in monitoring, advocating and awareness raising in home countries and engagement in policy- discussions at EU level. It also requires well-established and qualified civil society and media actors to generate positive pressure on the relevant institutions, and keep the citizens informed in a way that is accessible and actionable.
Studies show that, despite efforts made in this regard, the Western Balkan and Turkey region faces a number of challenges impeding progress, such as: limited local buy-in of the reforms, conflicting legislation, lack of a critical mass that can monitor developments and exert pressure on policy-makers, weak dialogue with institutions, poor understanding and coverage of climate change and environmental news, and very sparse resonance with current EU environment-related discussions such as circular economy aspects.
In response to these needs, ENV-net, as a proven regional network and advocacy actor, in the forthcoming three years will work on improving evidence-based policy-making and policy-influencing on climate change and environmental legislation in each of the ENV.net partner countries.
The network focus will be to generate region-representative evidence-supported input to contribute to EU discussions on matters of climate change and environment, and to explore and introduce to the region new inter-related aspects such as circular economy.
In the process, the network foresees to also technically and financially support civil society organisations and media in each of the network partner countries, to better understand and work on these issues.
The action is supported by the European Commission through the programme for Consolidating Regional Thematic Networks of Civil Society Organisations

ENV.net team is inviting you to follow and join efforts. Stay tuned!