Legislation: In terms of the degree of compliance with the EU environmental acquis, intense legislative activity of the Ministry in charge of Environment and other institutions with responsibility in this area has led to a significant level of transposition of the relevant EU regulations. According to the Progress Monitoring Report for the year of 2012, the majority of EU directives relating to the so-called horizontal issues, nature protection, management of chemicals and noise are completely or almost completely transposed into national legislation. In other areas (air quality, waste management, water protection and industrial pollution control) the bulk of EU legislation has largely been transposed into national legislation. With regard to the obligations of the Republic of Serbia as a non-Annex 1 country in the UN Framework Convention on Climate Change and the complexity and cost of implementation of these regulations, the compliance with the acquis in the climate package has just started. National Environmental Approximation Strategy, with the assumption that the Serbia will be a member of the EU by 2019, provides for the achievement of full transposition of most of the acquis by the end of 2014.

Administrative and institutional capacity: The existing administrative capacity, especially at the local level are assessed as insufficient for adequate implementation. Given the complexity of the environmental acquis, and the fact that the jurisdiction of the EU is divided between a numbers of institutions in this area, there is a strong need to further strengthen inter-agency cooperation and coordination.

Financial investments: Given the institutional complexity and multidisciplinary nature of the field of environment, full transposition of the acquis may require a longer time frame, especially in the case of directives that require large financial investments (heavy investment directives).

Year 2013: The activities in the sector stagnated in 2013, and it is to be seen how it will be reported in the 2013 Progress Report, as well as to see the further “speed” to implement commitments in environmental sector.

Within ENV.net project, short analysis is perform related the activities in sector in the time frame from 2002 (see bellow). 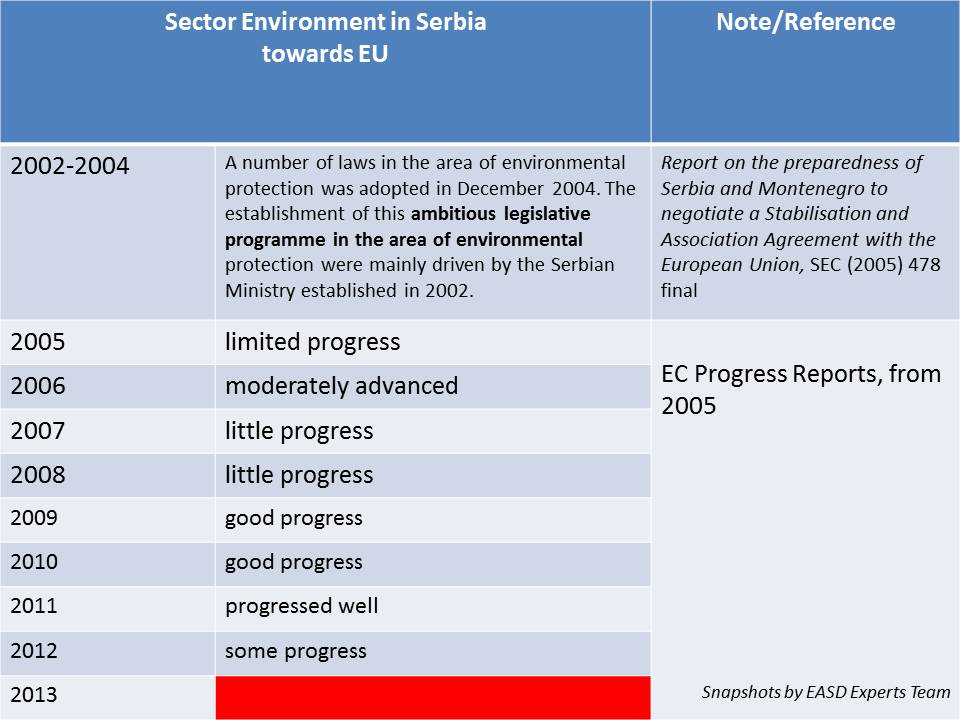 EASD participated in the process towards Progress report for 2013 (2013-Progress-Report-EASD-contribution).